One year since I took my first-ever sincere pregnancy test to be sure the uterus about to be removed contained no life but my own.

One year since a one-hour surgery stretched to three while my family and friends waited, trying not to think something had gone wrong.

One year since one of the most difficult hysterectomies my gynecologist says she's performed.

One year since the last time a stranger's blood kept me alive.

One year since I woke up, confused and disoriented, unable to feel anything between bellybutton and upper thighs, to the news that the difficult surgery had been a success but I'd lost so very much blood that I needed oxygen for a little while more, and to rest while the local they'd used on top of the general wore off.

One year since I tried to explain to the nurse that losing so very much blood was a thing I just did on a regular basis, but probably just hurled garbled syllables at her.

It was a mess in there, I'm told.  Endometrioma, asymptomatic endometriosis, massive fibroids, something called 'spongy uterus' and an ovary so deeply grafted into it that there was no hope of saving it.  My fallopian tubes were nowhere to be found; there's no way to tell if the uterus ate them or they were simply never there.  My reproductive organs, at their end, were a collection of womanhood gone rogue.  One lone half-ovary lingers, spiking my life with cravings and mood swings that no longer act as harbingers of, well, anything.

They couldn't stop the bleeding for a long time during the surgery, the doctor told me frankly when she came to see me.  I told her not to worry, I'd never been able to stop it either.

But it's stopped now, and the change is extraordinary.

A little over three years ago I staggered, crying, towards the top of the Panoramic Trail in Muir Woods, where my then-boyfriend was hoping to propose.  I was defeated long before we reached the top, moving a hundred, two hundred feet at a time before I had to hold a tree to stand.  He chose a more accessible location for his proposal, and I accepted, because (among many other reasons) what better metaphor for married life can there be than kindly and patiently holding your beloved's hand while she tries to overcome her own malfunctions and fight her way to the top of the trail?

Three months later I was in the emergency room, with doctors explaining that my iron level was life-threatening and probably had been for months.  I'd known I was anemic, but not how deep that particular crisis had become.  I fought my way through supplements, infusions, transfusions, hormones, exercises, and every other suggestion made to me, until finally the only thing left was "Stop losing blood, for good."

I still wake up tired a lot of days, because my sleep habits have never been great, but it's "Man I stayed up too late again," not "I'm not sure I can move my legs today."  I can actually, if I don't set an alarm, sleep long enough in a single night to wake up refreshed.  I come home from work and sometimes I just...do housework or work on a project because I feel like it, not because I'm racing a deadline and out of time.

I started back to the gym eleven months ago with gentle treadmill walks, and added in light weight training a few weeks later.  I miss sometimes because I'm busy, but I don't skip workouts any more because I'm too exhausted to do them, and I've steadily put on muscle.  I can walk on the treadmill at a three-mile pace, or run on the elliptical, for thirty solid minutes without stopping.

My husband and I just got back from a trip to Ireland, where we walked over fifty miles in two weeks, including a grueling trek through the London Underground with all our luggage, hefting our fully loaded suitcases up and down the steps with one hand at times.  One of the highlights of that trip was the day I took off solo hiking, only to end up slightly lost in a Galway sheep pasture, falling and badly injuring my knee.  I could still walk, but a year before an injury of any severity would have been perfect reason to head back to the B&B and declare myself done for the day, or maybe the week.  Instead, I hiked another three miles that day and more the two days following.

But it's the little things, the small changes most people don't understand, that really stick with me.  Today I'm wearing a pale lacy peach dress and a white sweater.  I never would have dared before; my pre-hysterectomy wardrobe is a cavalcade of long, full, dark skirts chosen because they wouldn't show blood as badly, and dark or patterned tops that I wouldn't stain with bloody hands by accident.  I pack extra tie-dye in the space in my camping gear that used to be reserved for a massive supply of cloth and disposable backup pads.  We planned our recent vacation around when we wanted to travel, not when I hoped to have the best chance not to be navigating airplane bathrooms on a half-hourly basis and trying to explain to flight attendants that their choices were let me up out of my seat or clean up the blood themselves.  An entire complicating factor has simply just been...taken out of my calculations.

My body no longer sets the conditions on me that it once did; gone is the constant awareness of the possibility that a miscalculation or delay will ruin both outfit and afternoon.  Getting distracted while working on a project just means I'm stiff from sitting too long, not a dismayed realisation that I've missed one too many warnings from my body that catastrophic bleeding is imminent.  I no longer have to plan to carve out six to eight days off work each year to receive iron infusions and see doctors, or an extra three to five sick days for pure exhaustion.  I've found new confidence at work, to talk about projects I want to take on and challenges I want to seek out.

What strikes me the most is how the haze has lifted, and continued to lift.  I have no idea how far down I was into chronic exhaustion after years of constant anemia, but about three weeks ago I found a new level of energy:  having done all the things I *needed* to do, and all the things on my dedicated to-do list, I created a new long-term project for myself, and sat down to give several hours of time and intellectual labor to it.

As to that Panorama Trail that kicked my ass three years ago, we revisited Muir Woods last fall, and I'll simply say that a picture speaks a thousand words. 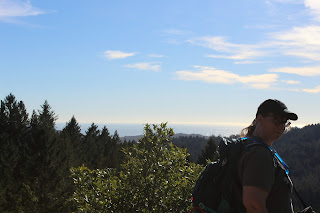